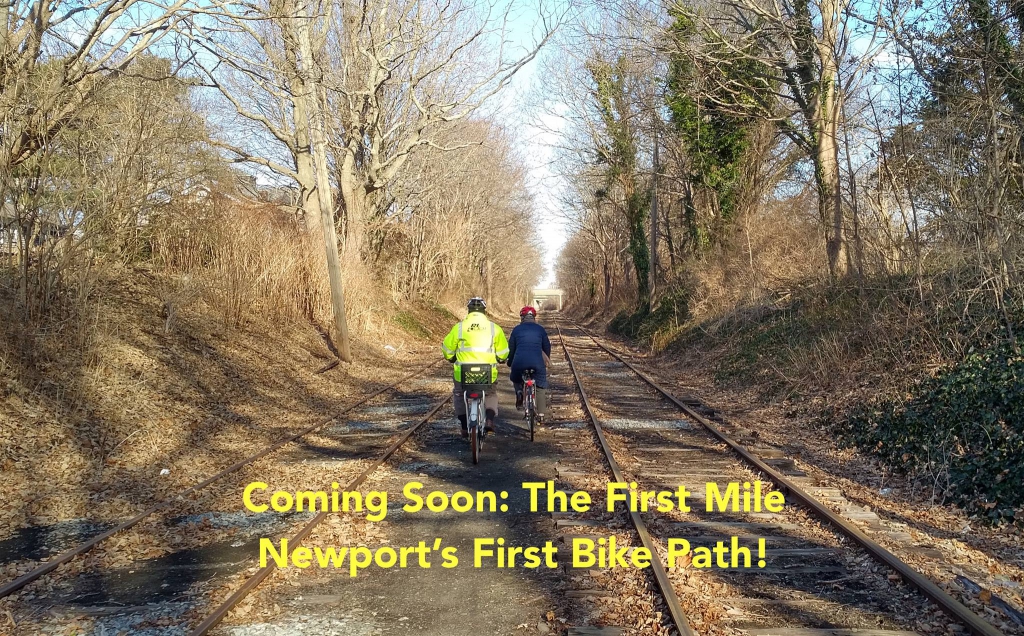 On Monday, March 13th, RI Governor Gina Raimondo announced the bikeway projects that will be funded by the state’s Greenway Economy Bond. The roster of priority projects expands the state’s bike path network while improving safety, equity and connectivity for people on bikes.

Bond-funded projects will connect and extend segments of the Blackstone River Bikeway and the South County Bikeway, make the Jamestown Bridge bicycle accessible, establish new bikeways in Westerly and on Newport, and improve on-road connections in Olneyville and other urgent locations.

In Newport, “The First Mile” actually stretches 1.7 miles and is the articulation of a decades-long dream for a shared use path in the rail corridor. It will be the first protected bikeway on Aquidneck Island, other than the exemplary separated bicycle and pedestrian lane on the new Sakonnet Bridge. The rail-with-trail path will run from the Rail Depot adjacent to the Visitors Center at the south end to the vicinity of CCRI Newport at the north end. The multi-use path will provide safe and inviting passage for pedestrians and cyclists between Newport’s downtown and the residences, schools, parks, and businesses of the north end. The rail corridor path will pass through the area of the Pell Bridge ramp realignment and the upcoming Newport Innovation Hub, providing an alternative short-distance entry to Newport for everyone who wishes to leave their cars outside of the city. The path has the potential to reduce traffic congestion, relieve parking stresses, add to the Newport outdoor experience, and improve road safety for high numbers of residents and visitors alike.

“It is exciting to think about the impact this project will have – from connecting communities to promoting green commuting options and enjoyment of the outdoors and beautiful Newport,” said DEM Director Janet Coit.  “The investments we’re making with the Green Economy Bond are important for Rhode Island – for our environment, economy and families. And they wouldn’t be possible without the leadership and strong support of community partners like Bike Newport.  I am grateful to the entire bike advocacy team that came together to advocate for this funding and to work with us to produce a list of projects that will dramatically improve our bike facilities across the state.  Kudos to a job well done! I look forward to celebrating completion of The First Mile project.”

A proposed rail corridor bikeway is referenced in numerous historic planning documents dating back decades. Most recently it is a featured recommendation in the Aquidneck Island Transportation Study (2012), the Newport Comprehensive Land Use Plan (expected 2017), and the upcoming Newport Open Space Master Plan. It is included in the plans for the Pell Bridge ramp realignment and the Newport Innovation Hub. It is a primary focus of work by Bike Newport, Aquidneck Island Planning Commission, the Newport Health Equity Zones, and the Open Space Partnership. The Newport Rail with Trail path is also included in the State Transportation Improvement Plan.

Bike Newport has advocated for the First Mile since its inception in 2012. Bari Freeman, the agency’s executive director, serves on the RI Transportation Advisory Committee (TAC) and the statewide bike path group, Paths to Progress. Advocacy for the First Mile has been met with consistent statewide support. Ms. Freeman explains, “These projects represent the start of connecting one of the most beautiful statewide bikeway networks in the country. It’s also the chance to begin needed bike paths on Aquidneck Island. Starting at the south end of the rail corridor, we will see significant community benefits and improve transportation for the greatest number of people. From here we can work our way up to connect with the rest of the state.”

The First Mile has advanced and will proceed thanks to the partnership of numerous stakeholder groups including the RI Department of Transportation, RI Department of Environmental Management, RI Turnpike and Bridge Authority, the Aquidneck Island Planning Commission, the City of Newport, Seaview Railroad – operator of the Newport Dinner Train, Bike Newport, numerous conservation and open space agencies, and resident advocacy groups such as Newport Health Equity Zones.