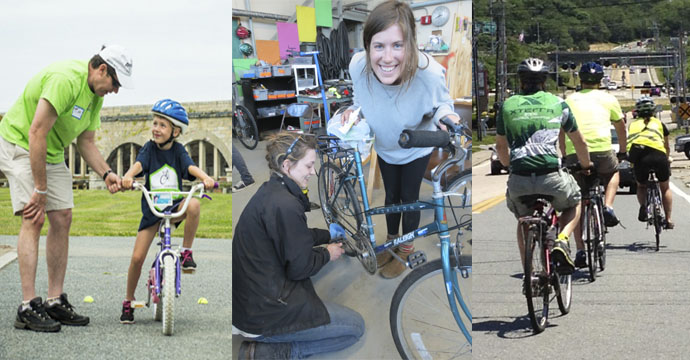 Did you know that the number one reason people don’t bike is a lack of confidence riding with motorized traffic? This oft-cited 2009 report by the Portland Bureau of Transportation split up the general population into four types of cyclists: less than 1% were “Strong and Fearless” , 7% were “Enthused and Confident”, 60% were “Interested but Concerned”, and 33% were “No Way No How”.

We want to reach and support that 60% – those who would like to bike for transportation and recreation in and around Newport, but don’t. These hesitant cyclists would benefit from many basic skills that can improve bike safety, road sharing, and confidence. Are you “Interested but Concerned”, or do you know somebody who might be? Overcome your worries and start down the road to a car-light life by signing up for a class. Bike Newport offers a variety of educational programs at our Bike Garage locations as well as on-road. Or, gather a group of eight or more and we’ll come to you! Sign up here.