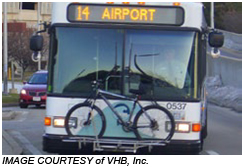 There are many, especially in the bicycle community, who are aware how the drive-everywhere culture has eroded the quality of both cities and the countryside, that transportation emissions are the largest source of greenhouse gas emissions, that always driving contributes to obesity and ill-health as well as the outflow of RI dollars to out of state oil interests, and supplying gasoline often pollutes the air and water and plays a role in our military adventures overseas.  And there are some who simply want to save money, as a car can cost about $10,000/year, even eliminating a second car can save much money over time.

So for those wondering about the alternatives to car travel, note the power of a bicycle to get around is supplemented, for no additional charge, by the bike racks on all the full size RIPTA buses, the off-peak MBTA commuter trains and from now through October 14,  the Providence-Newport ferry.  Most days the ferry is scheduled to leave Providence at 9:30am, 12:30, 3:30, and this summer, on the weekends the first and third trips will also stop in Bristol.  See www.seastreak.com for complete schedules.  It should be noted the ferries are supplemented by frequent Providence-Newport Route 60 RIPTA service that provides a lot of flexibility for a round trip. RIPTA also has connecting service between downtown Providence and the ferry landing.

Don’t forget that for biking in the Providence area JUMP Bikes are a new option. Scooter share is also available in the city.

In many cases RIPTA service is much better than non-users think it is.  For example, that Providence -Newport #60 runs at least 47 trips/day each weekday each way, and even on weekends has 30 round trips Saturday, 21 on Sunday.  Similarly RIPTA has very frequent service to T F Green Airport (14 express trips weekdays on Route 14 between the Airport, Providence and South County or Newport,  plus many local trips on the #1 and #20 lines, plus the commuter rail)  Many of RIPTA’s core routes have such levels of service and RIPTA goes not just downtown but to just about all the community colleges, colleges, and universities, hospitals, the Roger Williams Park zoo, Slater Mill, most big shopping centers, check it out at www.ripta.com or call 781-9400.  By the way, despite some well publicized rare accidents, bus travel is about 24 times safer per passenger-mile than car travel.

But biking is not the only form of “fossil free” travel, don’t forget walking: it only takes about 20 minutes to walk a mile, a frequent trip length, and it is healthier, and cheaper, than driving!

The MBTA runs 20 trains between Providence and Boston each way weekdays  The earliest “off-peak” train that carries bikes leaves Providence at 9:50 am, and gets to Boston in time to have much of the day to ride around. For example Back Bay Station is just a few blocks from the Charles River bikeways.  On weekends, though service is reduced to 9 trains on Saturdays and 7 on Sunday, all take bicycles.  The earliest train on Saturday leaves Providence at 6:25 am.   The Sharon station accesses the wonderful Mass Audubon Moose Hill Sanctuary. Note the MBTA still has the $10 all-weekend  unlimited commuter rail pass and that can take you to destinations such as Plymouth, Wellesley, Salem, Rockport, Concord, and more.

Another option are Amtrak trains.  Though not cheap, they are already electrified, fast, and comfortable, and besides travel to New York or Boston, also provide an option to travel between Westerly, Kingston, and Providence.  That is supplemented by RIPTA’s 66 and 95X routes.

Though not everyone can always avoid driving, many of us can, and, might benefit from doing so.  So please give this some thought!