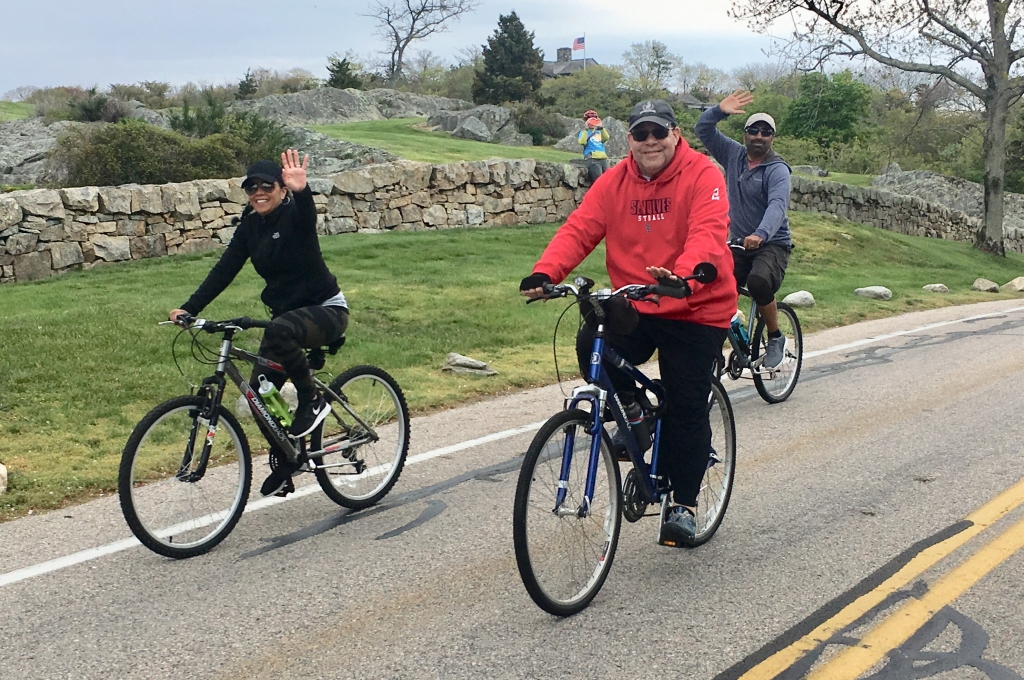 Friday May 17th marked the annual Bike to Work Day in Newport and across the country. It was a busy day for bikes in front of City Hall beginning with the Bike Commuter Breakfast. Cycling employees from Naval Station Newport, Newport Hospital, Preservation Society, Innovate Newport, and other local workplaces enjoyed refreshments and camaraderie of fellow cyclists.

Later in the day, cyclists welcomed Mayor Jamie Bova and heard plenty of cycling news and updates. “We have a number of projects that directly or indirectly will contribute to bike safety in the city,” Mayor Bova announced. The Mayor explained the upcoming highly visible crosswalk locations on Broadway, Memorial Boulevard, and Bellevue. She also referenced bicycle accommodation as primary elements of the J.T Connell Highway repaving Pell Bridge ramp realignment design.

Bike Newport’s Executive Director, Bari Freeman, continued with more bike friendly updates for the City By the Sea: the ‘First Mile’ bike path in the rail corridor from the Newport Visitor Center to the rotary as a first step in the Pell Bridge ramp project to enhance safe passage during construction; supporting awareness enhancement of a proposed Green and Complete Streets ordinance along with partner Grow Smart RI, spearheaded by the Newport HEZ; progress at the Big Blue Bike Barn including completed trails into Miantonomi Park, upcoming building of a pump track, and upcoming muraling of the two 40’ containers that will be the heart of summer programs – a true place of pride for the surrounding neighborhoods and city; and near-release of the first statewide Bicycle Mobility Plan to support bicycle infrastructure planning in Newport and all other RI municipalities.

Discover Newport’s CEO – and 2018 Bicycle Friendly Business of the Year awardee – Evan Smith encouraged multi-modal transportation as the best means to help reduce traffic congestion. As Chairperson of the Newport Pell Bridge 50th Anniversary, Smith also announced the bridge celebration at Fort Adams State Park on Friday, June 28th – with a free concert by ‘Take it to the Bridge,’ and fireworks: “Bike there, bring a picnic and look out for a very special reveal on the bridge that night!”

The Bike-Friendly Businesses of 2019 were revealed – honoring Parlor Bar & Kitchen and Empire Tea & Coffee for their support of bicycling, bicyclists, and Bike Newport. The award was again fabricated by local artists Howard and Mary Newman – who annually express their support and enthusiasm for improved biking by creating the awards that honor bike friendly businesses. “We’re sorry we can’t be there,” they shared, “Huge thanks to Parlor and Empire for encouraging more people to choose bicycles to get around through their bike-friendly hospitality.”

Then, on Sunday, May 19th, the Newport community experienced a new tradition as “Elliot’s Ride for Everyone” – an event for every person of every age and ability to ride – gathered together for Newport’s first ever car-free ride along Newport’s Ocean Drive. Elliot’s Ride brought 400+ people together to ride along the ocean, celebrating the chance to ride separately from cars.

Mayor Jamie Bova , Superintendent of Newport Schools Colleen Jermain, and US Congressman David Cicilline welcomed participants and honored the namesake of the ride, Elliot Kaminitz. “This is a really important day to remember Dr. Kaminitz who loved biking and loved Newport,” Representative Cicilline remarked. “I want to say to his family, ‘thank you’ again,” “They took a horrible personal tragedy and made it into something really wonderful for the community, and it’s a great reminder that biking is such a wonderful community activity.”

More than 400 people rode together as families, friends and neighbors coming together– a true community experience. Several young participants shared all day long, “Riding without cars is very fun!” The kids totally ruled the road, riding fearlessly, flying down Ocean Drive without the need to worry about cars.

Bike-On, the Warwick-based distributor of custom adaptive bicycles helped many participants with mobility challenges to be right there in the heart of the ride – enjoying the wind in their faces and all the thrills of biking together with their friends and family.

“The experience of seeing 400 people of every age, skill, and comfort enjoying these beautiful places without worry about cars was incredible. It was only two hours and so very many happy people,’ enthused Freeman, “It was a great statement of what’s possible when we all work together and understand that our roads are public spaces. Thanks everyone! We’ll keep this effort strong and work toward more ways to ride safely separated.”

Elliot’s Ride for Everyone honors Elliot Kaminitz, who lost his life while biking near Easton’s Beach in 2012 and raises funds for bike safety education programs through donations focusing on programs for health, equity, connectivity, economy, quality of life and quality of place. His wife, Renee Kaminitz became a board member at Bike Newport and an advocate for safer cycling. “Elliot would so greatly support this event, this movement. He wanted to see more people on bikes while shining a spotlight on the importance of road safety,” Renee shared, “We’re so happy that so many people came out for Elliot’s Ride for Everyone and showed what’s possible for community health and happiness.”