At last night’s Newport City Council meeting, the Council voted to receive the recommendations of the City Manager for angle parking on Broadway to remain “front-in”.  Following here is the letter read and submitted to the Council by Bari George of Bike Newport, asking the Council to become informed as to the reasons that back-in…  read more 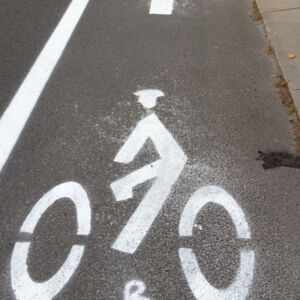 Aquidneck Island has its first bike lanes, but what do those white markings mean? There are two new  symbols on Memorial Blvd now and many of us are unfamiliar with them. One means the lane is for bikes only and the other means it’s a shared lane used by bikes and cars.   BIKE LANE –…  read more

Newport City Council voted this week to revisit Reverse Diagonal Parking in the Broadway Streetscape Plan as a method of increasing safety and reducing risk for motorists, cyclists and pedestrians. What do you think? See links to articles below where you can participate in the discussion. View a short informative video here. Newport Patch Newport…  read more

Newport City Council will hold a public workshop with RI Department of Transportation to review RIDOT’s proposed changes to Memorial Blvd to improve pedestrian and bicyclist safety.  City Hall Council Chambers, Wed 8/15, 6:30pm. Interested residents and advocates are also invited to view and discuss the plan in advance of the Council Workshop at Bike…  read more

Yesterday, the State House announced that RIDOT has four proposals for road improvements in Newport before the State Traffic Commission: 1)   Rebuild the railroad crossings at Elm and Poplar Streets 2)   installation of a crosswalk on America’s Cup just south of the Brick Market. 3)   a crosswalk on Memorial Blvd at Thomas Street, and 4)  …  read more

Here is the text of a State House press statement released today, including announcement of the review of Memorial Blvd for bicyclist safety: 7/19/2012 Crosswalk approved for Newport’s Americas Cup Avenue  STATE HOUSE – Acting on a request submitted by Rep. Peter Martin (D-Dist. 75, Newport), the State Traffic Commission has approved installation of a…  read more

Friday,  May 18th Whether you’re heading to work, school or errands, Friday, May 18, 2012 is the day to leave your car home and hop in the saddle. We want to see swarms of cyclists from dawn to dusk and we’ve got a day planned to tickle your two-wheeling fancies.  From “Park & Bike” at…  read more

photo:  Newport Green 2007 by RI State Representative Peter Martin, www.stacyhouse.com Envision a Rail Trail by Tom Shevlin, Newport This Week, 2/2/12 … On a recent blustery Saturday, a small group of public officials and cycling enthusiasts climbed aboard the parlor car of the Old Colony & Newport Railway and set out for what the volunteer…  read more

Today was an important day for a future Aquidneck Island Bike Path. Huge thanks to Rep Peter Martin and the volunteers of the Old Colony & Newport Railway (OCNRR) for taking us on a 4-hour “long ride” of the island’s rail corridor. An incredible group of knowledgeable and interested representatives from all three towns, considering…  read more